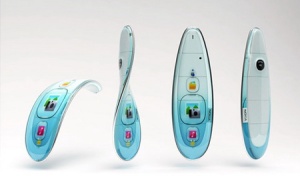 With the trend of “no phone” restaurants it’s now common to see stacks of smartphones on the table: the phones are actually mating!

Like a sci-fi film, smartphones are mating, multiplying, imbedding and ingratiating.

At the 2013 Consumer Electronics Show (CES), the bellwether of all things tech, smartphone innovations dominated. No wonder:  In 2013, 56% of all cell phones in the US will be smartphone, according to eMarketer, with 2012 smartphone demand up +24%. Morgan Stanley predicts that 2013 will be the year that global Internet connections via smartphones surpass connections via computers.

Tons of new brands and models are flooding the market with cool phones. They’re all smart. They all run on Android and quad-core processors (super fast). They all have 13-megapixel cameras and HD displays. They all have Bluetooth and/or WiFi. And, they’re all open ecosystems that encourage Apps. The standard bar has just been raised (sky rocketed, in fact), and iPhone better watch out! Spoiler alert: Apple shares will drop in 2013.

Samsung’s prototype phone is made with super-thin plastic technology, called Youm, which can be bent and folded like paper! Isn’t it ironic how the digital world strives to emulate the analog world?

The design of smartphones is evolving quickly. They’re not only getting more intelligent (higher IQs), they’re also gaining in Emotional Quotient (higher EQs). There’s been a big industry shift from “specs to UX”, meaning less attention to “features” since phones operate on similar platforms, and more attention paid to User Experience (UX) and design. From paper thin phones that FOLD (see photo) to Huawei’s “magic touch” phone you can operate while wearing gloves to Samsung’s round-edge phone (see photo) to Sony’s waterproof phone to a plethora of “phablets” (large tablet size phones, that appeal to aging eyes).

A trend in consumer electronics is “round design”.

Phones are being redesigned with insights if you consider the past 3 years “beta test” years. For example, they’ve learned that the swipe/touch-screen isn’t ideal for every function; the new Sony Xperia has physical camera button that “clicks”, replacing the unreliable tablet “tap”, eliminating “did it take the picture?”  frustration.

The biggest impact of smartphones on our culture is: mobility. Having the ability to access information, geo-locate and communicate anywhere has set us free. Rural communities have new opportunities. Small enterprise can thrive. People can travel and explore like never before.  Some of the biggest leaps in civilization have been predicated on mobility (i.e., the transportation of ideas and/or people).

Mobility started with the wheel, and now the wheel is being reinvented in the form of a smartphone.

Reflect on the impact of some of the cultural game-changers: the wheel, domesticated horses, boat design, carrier pigeons, the auto, the airplane, the radio wave and the Internet. Like the  smartphone, each of these inventions were culturally catalytic. Expect our society to undergo huge transformations in the next decade as smartphone penetration rises in the US and globally… 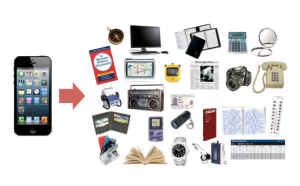 The smartphone is  actually a “remote for your life”: key, wallet, diary, camera, controller, etc. Some phones are now equipped with Infared Blasters (IR) that turn the phone into a universal remote control, replacing everything that operates on a clicker: TV, TiVo, air conditioner, ceiling fan, smart appliances, garage doors, etc.

Many “SoLoMo” (social + geoloco + mobile) games debuted at recent “Come Out & Play Festivals around the country in 2012. Augmented Reality apps turn the smartphone into a “looking glass”, adding layers to IRL (“in real life”; the mere fact that we even need this expression denotes a schism between real and unreal life).

And now there’s an actually joystick device that attaches to the touch-screen surface of a smartphone, giving fingers a more tactile joystick-like experience to control anything from  a game, to a drone. It can also be used for real-time voting and measuring mood and opinion (think: CNN ‘s  +/- approval trail graphs that  run on the bottom of thr TV screen during the presidential debates).

smartphone as engine (“iPhone Inside” replaces “Intel Inside”)

CES also featured a number of new products that are driven by a smartphone. In other words, the smartphone becomes the brain of the consumer electronic device. For example, Will.i.am launched his camera exoskeleton, called “fofo.sosho V.4”, which houses an iPhone (see photo). This replaces the limitations of the “phone camera” with a “camera driven by a powerful phone”. Another invention is the Felt speaker: a powerful, small speaker system that snaps onto the phone, replacing docking phones in speakers – now speakers attach to the phone. A big opportunity for inventors is to capitalize on the trend of smartphones functioning as processors to drive the function of devices. It’s possible that “Intel Inside” might be replaced by “iPhone Inside”.

And so we burst into the “Era of Mobility” with the smartphone at is core. While the smartphone might seem like a positive piece of technology, consider the impact is has on human behavior and culture. Ponder what it will be like to live in a world where there is:

Welcome to the “can you hear me now” nation.